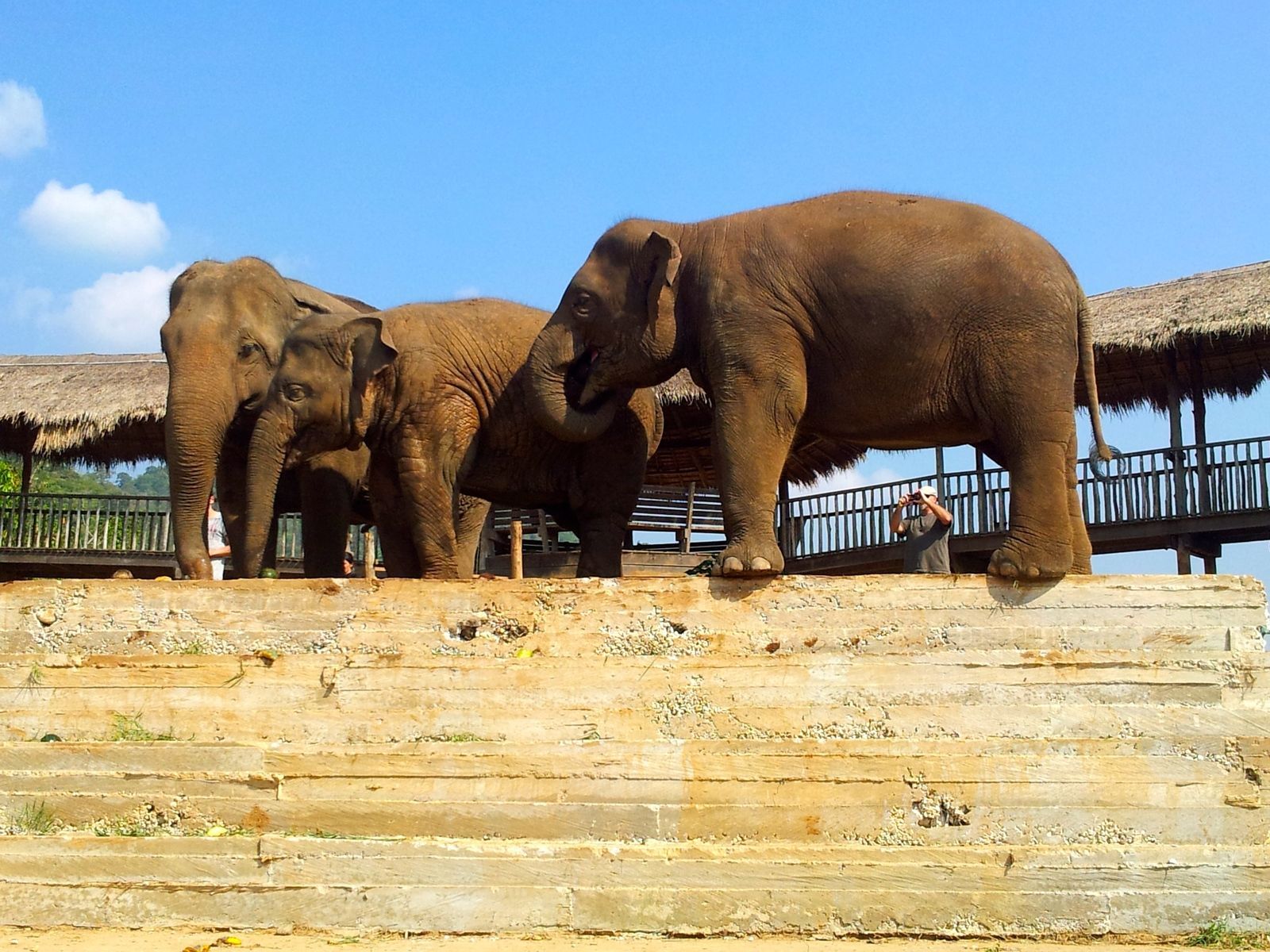 A Personal Perspective from Ed Shanaphy

I have never liked “Tennis Moms”. In the industry we can pick them out a mile away at any tournament. These women usually wear tennis clothes to their child’s tournaments – seemingly ready to walk onto the court in their child’s place and beat to a pulp the young junior on the other side.  They have their 8 year old outfitted with a racquet bag that is bigger than Federer’s and have all those slogans on both their own and their child’s shirts – slogans like “Beat It” or “The Ball is in MY Court!” There was always an elephant on the court when I played as a junior – the Mom staring me down from just outside the fence. Thank God there was a fence, otherwise she might come on court and wallop me.

I grew up playing against kids who had their tennis moms clapping at my mistakes. They coached at each turnover and scowled at any close call I made against their child. Tennis Moms would glare at me if I happened to go for a shot and hit a winner against their “Little Joey” who was always taller than I, as I have always been vertically challenged. I remember some of these moms more vividly than I do their kids with whom I hit long, pushy, points deep into a third set – long before the idea of a third set tie-breaker was born.

They gave their little ones thermoses of gatorade with supplements mixed in. The thermoses were more like massive jugs hanging off a plastic handle that the juniors could barely get their hands around. The weight of the thermos needed two hands so the big racquet bag kept falling off the child’s shoulders as he walked next to me as I carried my single Maxply Fort and paper cup full of water to the battlefield we were assigned to. The Tennis Mom’s car, parked as close to the back fence as possible for viewing and access, was stocked with bananas and anti-cramping powders. The prematch program included dynamic stretching and index cards describing various strategies in hieroglyphics which I thought looked like advanced algebra. Math SATs were not my strongpoint.

It’s our tennis industry’s version of the hit television show Dance Moms. I never liked Tennis Moms. I still don’t like them. But now… I’m a Tennis Dad.

My daughter, age 9, went to play her fourth tournament this past weekend and I had to fight hard from becoming a Tennis Dad. I guess we’ve all gone through it, whether it’s on a baseball diamond, soccer field or football gridiron. But tennis seems to bring the worst of us parents out. Maybe because it’s singles at this age and there are no teammates or team coach to which we can shift blame.

During six round-robin matches, I refrained from making motions toward my daughter and I looked away when she gave me a thumbs up so as to not be accused of coaching. We all know what that can lead to after this year’s US Open. I stopped myself from putting my fist through the glass table each time she hit a ball on the fly that was destined to test the strength of the fence behind her.

My daughter played wonderfully well amid my frustration with her going for too big a first serve. Apples don’t fall far from the tree. And in the minds of all at the tournament she won her first tournament and was looking forward to receiving the trophy. But, alas, she she picked up the third place trophy as the young boy whom she had beaten and knew he had to win against Olivia looked startled as he picked up the first place trophy. Really? What does she have to do to win a tournament at this orange ball level.

For those of you who are not at the cutting edge of 9 year-old competitive tennis, the USTA in their wisdom has come up with a progression for our American youth. Our tiny tots (4 to 7 year olds generally) play with oversized red balls which travel through the air very slowly and bounce low on every surface – on clay they just thud. Then as you move into the the upper echelons of the junior ranks and start playing Level 9 beginner tournaments in Florida (some regions don’t have Level 9 but start at Level 7), tournaments are played on a shortened court with orange balls. These are tennis balls that are less compressed and squishy. They travel slower than the regular ball through the air and bounce so that a junior can keep the ball more easily in their hitting zone – which is around waist height. Even with heavy topspin, the ball stays low so that the junior can create a technically valid swing with a shortened racquet which is just 25 inches compared to a regular 27 inches.

The jury is still out on this progression which moves on to green balls which are just slightly less deflated (Tom Brady would love USTA junior tennis) than the regular yellow balls we all know. Finally, at age 11, one gets to play with normal balls in the month of their birthday. You can either age out of orange and green balls or you can qualify by winning and participating to move up through the progression. Olivia’s not being named the winner cost her three or four trophies in USTA ratings (you collect stars and trophies through the progression) and not even being a finalist, having finished third, hurt her progression efforts.

So after what I thought was a simple miscalculation by the Tournament Director, who is a great motivator and volunteers his time to run this local tournament, I stepped into his office and questioned his mathematics nicely. He said that the “TDM” doesn’t figure winners by cumulative games won through the 7 rounds. “Ed, I just feed the scores in to the computer,” said the Tournament Director. I looked quizically around for an old-fashioned round-robin chart or tournament bracket of some kind. “Oh?” I said. So, if you win you come in third I thought to myself. Tough to relate this to a 9 year old still looking for her first tournament win. Basically, you feed the scores into the computer… and the USTA computer says: Thou Shalt Not Win.

This is when the Tennis Dad in me came out. There’s no handicapping in soccer – you lose. There’s no handicapping in football – you lose. But in USTA Junior Tennis, if you win, you lose. As I drove home trying not to show my emotions and attempted to get my head around the cumulative game calculations (my math SAT lagged far behind my verbal SAT as I mentioned above), I felt for my daughter. Olivia’s feelings were evident: she had been cheated out of a trophy by the USTA and its computer. Upon slamming the car door in the driveway, I had already in my mind formulated an email to my good friend up at USTA Florida’s headquarters in Orlando. I’d be nice. I’m in the industry and I don’t like to burn bridges, even though I am now a Tennis Dad. The line has to be drawn. I’d ask gently if there is a weighting or handicapping of which I was unaware.

Well the short answer is yes, there is a weighting and it put my daughter in third place, which really didn’t help her pathway to progress out of orange ball and up to green ball. She hates orange ball. And this is the rub: Youth progressions are great. But, my argument would be, progressions can’t be right for every junior. Boys and girls mature at different times.

And kids grow at various times. My daughter is 9 (she turns 10 in February) and is not vertically challenged. She’s 5 foot 4 and weighs 108 lbs and uses the same racquet that Serena uses – no junior racquet for her. She looks me in the eye straight ahead when I ask her to clear her plate. Someday in 2020 she’s going to say “no” as she looks down at me. This weekend, she played an 8 year old who came up to her waist. She hits the ball as hard as I can. She practices with a 12 year old who is top 10 in the USA and just returned from Canada where she represented the USA on the court.

But there was a deeper meaning to this weekend’s events. It’s good discipline to go through a progression. It’s a learning experience, not only for my daughter Olivia, but for me, the new Tennis Dad, so I can take my learnings to my job and figure out how to explain handicapping to my daughter. This is a big principle of life to explain to a 9 year old, because as I drove home formulating that email in my mind, I could also foresee future questions. “Dad, why didn’t I get chosen for gifted when Chas was the last boy to make it even between boys and girls but his grades aren’t as good as mine?” Or later on in life…”Dad, why can’t I get into that college and when was affirmative action started?” Or, “Dad, can you explain to me what a quota is?” If you win, you lose. Life isn’t always fair. And if you are the best at something, you still might lose.

Today was easy: “Dad, why didn’t I win when I had the most games?” Tomorrows are going to be more difficult for both of us. But the USTA helped me start this process. I worked hard at my answers this weekend so I could be trusted in the future. I discussed golf handicaps. I told her that playing one more orange ball tournament will help her topspin control. I showed her how her results over the weekend had moved her Universal Tennis Rating in a positive way – something that those colleges in the future will be looking at when she, God willing, hopefully applies. She nodded and took it all in. She agreed to play again at the USTA National Tennis Center in another orange ball tournament. I was happy that I had succeeded as a new, kindler, gentler Tennis Dad. It was then that she walloped me as she walked away to play with her Ipad: “Dad, why didn’t I win the last two tournaments when I came in second and third?” She has a memory like an elephant.

Ed Shanaphy is President of BeyondTheBaselines.com and has played and taught tennis competitively around the world, but is now, more importantly, a Tennis Dad.

1 thought on “An Elephant On The Tennis Court”